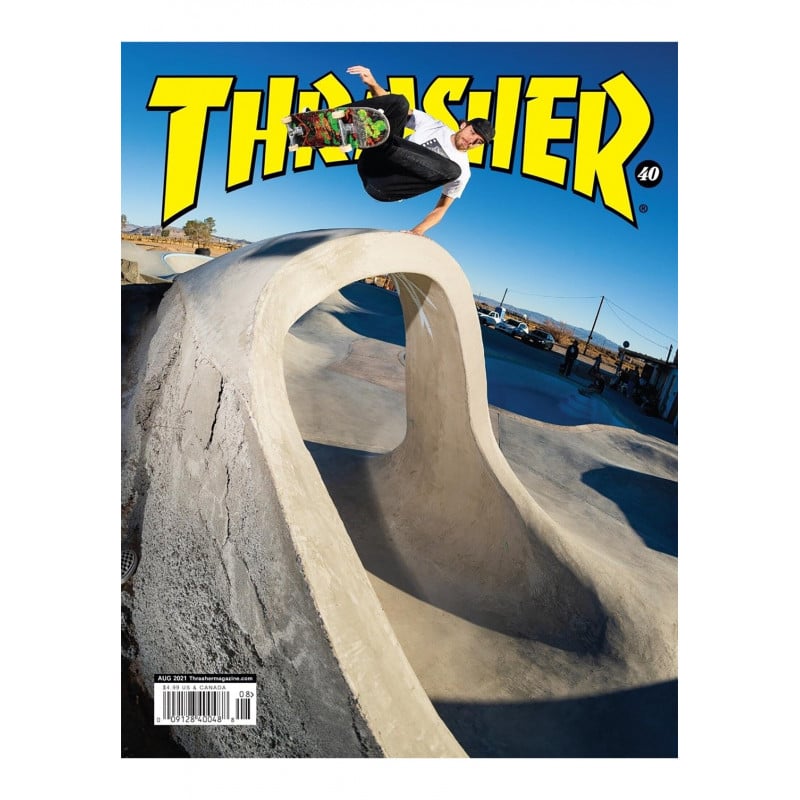 who gets two covers in one year? the 2018 soty tyshawn jones, that’s who! this straight nollie heel over a bump to bar let’s you know right away that the april 2019 issue is gonna be nuts. massive skater of the year miami/puerto rico trip article inside—featuring the whole crew (girlfriends included). in other soty-related biz, we talk to chris cole about the year(s) he got it and jamie foy passes the rusty torch to tj. travel-wise, the atlantic drifters slide themselves into athens for some classic shredding. need some coping crushed? you’re in luck—chris “the muscle" russell gets the thrasher interview treatment. strong, very strong. art aficionados will appreciate gonz’ new abnormal communication column, history buffs and graphics connoisseurs can dig into salman agah’s classic graphics and zounds fans can read jeff ament’s interview about the early days of the seattle skate/music scene and his skatepark construction crusade. this issue also has the thrasher abcs (alva to zorilla) and two free posters. call the doctor; this issue is sick.

miles silvas slices into a psycho switch back smith on a hefty hubba, welcoming you to the november 2015 issue. more miles and company madness inside with an lrg 1947 video feature. brandon nguyen gets the lunatic fringe treatment, gilbert crockett graces some pages with his patented brand of street strength. k-walks and crew take his pro party on the road. destination, okc. greyson fletcher hits the pacific northwest with the homies and etnies sets sail on a maiden mission for their upcoming full-length vid. need more? how about danny way breaking the highest-air record, hosoi talking hammerhead history and an ice cube interview? yeah, that'll do.

John Shanahan makes some street coping sing on the cover of the Nov ’20 issue with a gap to mega Philly bar in Brooklyn. More East Coast carnage inside with Jon’s Thrasher interview conducted by the legendary Josh Kalis. Other skaters in the hot seat this month include freshly-minted Almost pro John Dilo, Dangerous Dane Burman (seen that Hope to Die part yet?!), Chris “Cobra" Cole (who is back on Zero with Dane and the Chief) and an exceptional interview with Leo Baker, Cher Strauberry and Stephen Ostrowski about their new brand, Glue skateboards. Expect good things. On the staycation tip, Girl and Volcom socially distanced themselves from LA by escaping to Simon Bannerot’s stomping grounds in the PNW. We could all be so lucky. Need more?! Raney Beres hems on the Heroes + Heavies who influenced him along the way, Chris “Rhino" Rooney takes us down memory lane with a gallery of his best photos to date, Julian Lewis lands on the Lunatic Fringe (and finds a spot in the Foundation van) and Manny Santiago weighs in on Five Great West Coast spots. And while all of the aforementioned content is reason enough to buy this issue, Ray Barbee’s first Krooked ad is in this one so you’re definitely gonna wanna snag a copy, cut that out and thumbtack it to your bedroom wall. Fall is here but this issue is hot as hell.

The covers—front and back—should clue you in, but the September 2020 issue is chock full of LEGENDS. Up front, Darrell Stanton breaks down his June ’02 Classic Cover—the backside noseblunt down Clipper which is jaw dropping to this day, Gary Rogers pontificates on people he’s known, Clyde Singleton dishes on the chef life and his newfound sobriety, Alphonzo Rawls talks H-Street, art and skate footwear, Sal Barbier reminisces on his first big trip to CA from Louisiana, ‘80s pro Stephanie Person explains why nothing will ever be as hard as being a female skater, Karl Watson discusses Maxallure, his rider-owned biz supporting the next generation and we catch up with Forrest Edwards—and we’re not even halfway through the mag yet. Atiba Jefferson weighs in on the heroes and heavies who made him who he is today and we’ve got feature interviews with Ray Barbee, Kareem Campbell, Stevie Williams, Samarria Brevard, Steve Steadham, Robert Neal, Zion Wright, Marty Grimes, Kader Sylla, Ishod Wair and Nyjah Huston. Atiba sums up this mag with these poignant words: “This issue is a celebration of one of many cultures that have made an amazing impact on skateboarding… This is a story I have always been proud to be a part of, a story that has always been told by Thrasher and that we will continue to tell."

Get some skate inspiration and flip through a brand new Thrasher Magazine  Includes rad interviews, eye pleasing photography and a whole lot more.

Expand your skate knowledge a grab yourself the Thrasher Magazine July 2021! The inside is filled with awesome interviews, inspiring photography and the most important thing free stickers!

miles silvas slices into a psycho switch back smith on a hefty hubba, welcoming you to the november 2015 issue.

Get your hands on the November 2021 issue of Thrasher magazine!