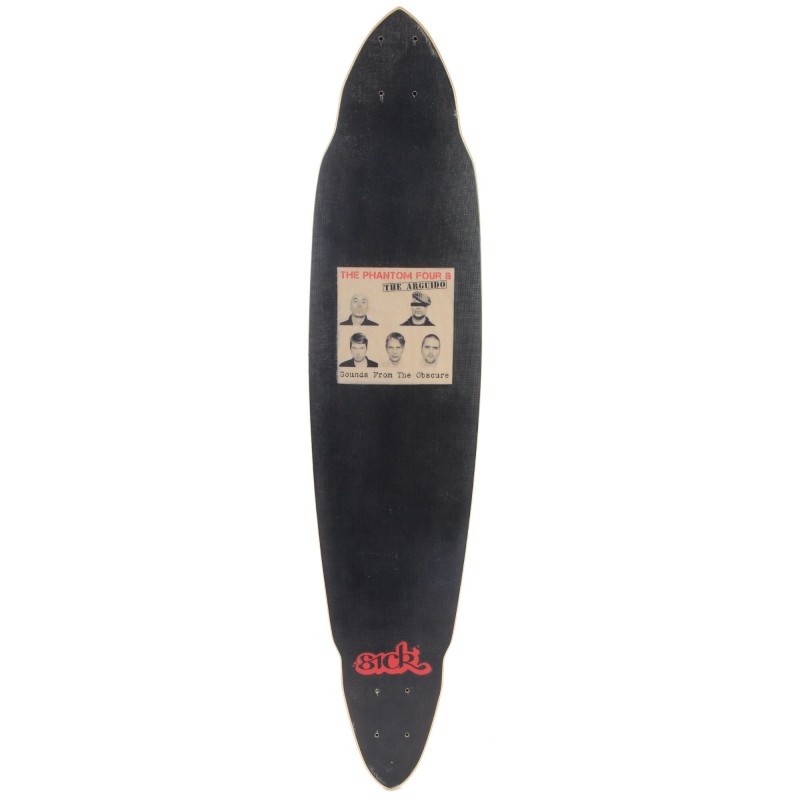 A custom made Special Edition Phantom Four & The Arguido longboard. Classic shaped surfstyle pintail, with concave and camber. Combine it with 180 mm reversed kingpin Trucks and max 70 mm Wheels for a good ride.

A custom made Special Edition Phantom Four & The Arguido longboard. Classic shaped surfstyle pintail, with concave and camber. Combine it with 180 mm reversed kingpin trucks and max 70 mm wheels for a good ride.

The Phantom Four & The Arguido

The Phantom Four & The Arguido are the best surfband from The Netherlands powered by the legendary frontman of the Urban Dance Squad. Together they create a unique sound that combines the rawness of eighties surf punk and new wave with a modern rock sound. The quintet plays a unique crossover between The Treble Spankers (predecessor of The Phantom Four) and old school Urban Dance Squad. The music sounds familiar and innovative, but is especially impressive live.

In the summer of 2011 the band recorded their debut album ' Sounds From The Obscure' in the Graveland studio's in the Netherlands. The record is mixed by Pelle Gunnerfeldt (Hives, Mando Diao, Refused etc.) who also mixed 2 songs of The Obscure EP (2011). The new record contains 12 stunning surf rock songs and is set for release 25-2- 2012 on Miranda Records. As a bonus it will have an instrumental CD for all the dedicated surf music fans.

The seemingly awkward cooperation came unexpected but developed smoothly into a new project. Phantom Frank: "A few years ago we played in the Bitterzoet in Amsterdam. After the show Rudeboy, who has been friends with our drummer for years, came to us to express his enthusiasm about our show. A year later we called him and asked him to record a song together for our upcoming (otherwise) instrumental album. We started playing live together and what began as a guest performance of a song evolved into a completely new project. "

Many surfers, skaters, boarders, rockabillies and punks are drawn to The Phantom & The Four Arguido. The rawness and energy of the band on stage often make for wild scenes in the pit. On stage, the quintet does not lack experience in performing. For the past six years The Phantom Four played nearly all major venues and festivals in The Netherlands and performed with artists such as Fun Lovin Criminals, G. Love & Special Sauce, Dick Dale and The Trashmen. The track record of The Arguido goes without saying.

3voor12 quote: "It is certain that we are dealing with the festival sensation of 2011. This will guarantee lots of jumping and moshing kids at Lowlands and Metropolis, as before ... "

LiveXS quote: "Rudeboy and these icons from the Dutch surf scene create a strong crossover in which all the best elements of the Urban Dance Squad and The Treble Spankers can be found”

The Phantom Four
Phantom Frank conquered The Netherlands with surfband The Treble Spankers in the late 90's. In the slipstream of the success of Pulp Fiction the band scored an airplayhit with Red Hot Navigator, played all major festivals in The Netherlands and sold 20.000 albums. Since 2005 Phantom Frank plays all over The Netherlands with his new band The Phantom Four. Early in it's existence the band becomes resident band of the “Noodlanding” at Paradiso and “Surf's Up” at the Melkweg. The band opens for bands like Dick Dale, Fun Lovin’ Criminals, G. Love & Special Sauce, and plays at major festivals like Lowlands and Paaspop. They quickly build a reputation as one of the best surfbands of The Netherlands, complete two Spanish tours and play Belgium, Germany and the UK.

Rudeboy = Patrick Tilon
a.k.a. Rudeboy (Remmington)
Vocalist of the Urban Dance Squad (‘86-‘99); the first rockband with a rapper and a scratcher, a band with a popprijs and two Edisons (Dutch Grammy's), a band that made the Billboard Hot 100 and sold 250.000 albums in the US, a band that (according to Dutch music magazine Oor) made the “best Dutch popalbum in history”, a band that shared the stage with bands like U2, Beastie Boys, Soundgarden, George Clinton and The Red Hot Chili Peppers and that served as a source of inspiration for the formation and sound of Rage Against The Machine.

More about the Phantom Four & The Arguido on: http://www.thephantomfour.nl 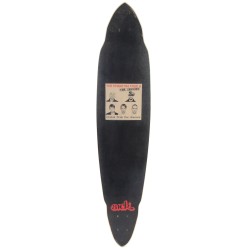